Mulan is a 2020 American action drama film produced by Walt Disney Pictures. It is a live-action adaptation of Disney’s 1998 animated film of the same name, based on the Chinese folklore “The Ballad of Mu-Lan”.

The film stars Liu Yifei in the title role, alongside Donnie Yen, Jason Scott Lee, Yoson An, Gong Li, and Jet Li in supporting roles. It is directed by Niki Caro, with screenplay by Rick Jaffa, Amanda Silver, Lauren Hynek, and Elizabeth Martin.

Plans for a live-action remake began in 2010, but the project stalled in development hell. In March 2015, a new attempt was announced and Caro was hired to direct in February 2017.

Liu was cast in the title role in November 2017, following a casting call of 1,000 actresses, and the rest of the cast joined over the following year.

Filming began in August 2018 and lasted through November, taking place in New Zealand and China. With a production budget of $200 million,

it is the most expensive film ever made by a female director. 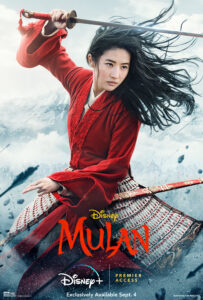